The bar charts below show the number of hours each teacher spent teaching in different schools in four different countries in 2001.

Summarize the information by selecting and reporting the main features, and make comparisons where relevant.

You should write at least 150 words. 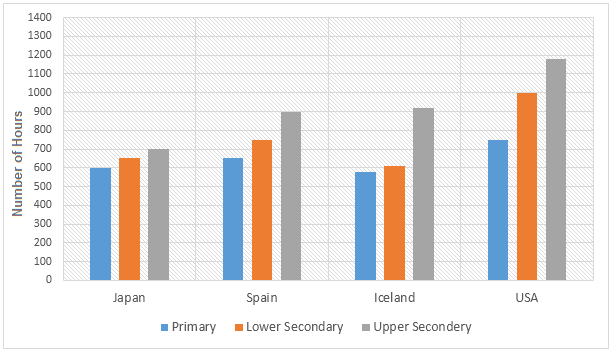 The bar graph outlines the average duration a teacher spent on three different levels in four different countries in 2001.

Overall, the teaching hours at the secondary level was higher than that of primary level and the US tutors spent more time teaching than the teachers in the other three countries did.

A US teacher spent more than 700 hours to teach primary students in 2001 while a Japanese educator disbursed exactly 600 hours for teaching the same graders. Time allocated to teaching elementary student by a Spanish teacher was 50 hours higher than that of Japanese teacher but it was less than 600 hours in Iceland. An American teacher’s average schooling duration in 2001 for lower secondary students was 1000 hours which was 300 to 400 hours higher than the teaching duration by a teacher in the other three countries.

Finally, higher secondary students received almost 1200 hours’ lectures by a teacher in the US and this duration was noticeable higher than of other countries. In Japan, an upper secondary level teacher taught for 700 hours in 2001, almost 500 hours less than that of a US teacher. In Iceland and Spain, teaching duration by a higher secondary level teacher was approximately 900 hours, about 300 hours less than that of an American teacher.